Want to be a writer? Listen.

“How do I become a writer?”

It’s a simple enough question, but when asked it by a fifth-grader, I was stumped. At first, I started to go down the cliche path: writers write.

“The answer everyone gives,” I said, “is that if you want to be a writer, write. Just make sure you write every day, and stick with it.”

The boy looked at me with no response, and I couldn’t blame him. What I’d said was about as useless as it was generic. Want to be a runner? Run. Want to write software? Write software. Want to be a firefighter? Fight fires.

Next, I latched on to a topic near and dear to my heart: craft. “Okay, so that I was kind of lame,” I said. “How about this? Work on the craft of your writing. Read aloud as you write and listen. Pay attention to rhythm and voice. Are there other ways of saying what you’re. . .”

I trailed off, realizing how discouraging I was being.

Finally, my brain clicked into gear and I hit on the truth.

“Start with listening,” I said. “Not to me, or to your teachers, though that’s good, too.” He laughed. “Listen to the world around you. Hear that hum? It’s coming from the fluorescent light over your head. How about that buzzing noise?”

“The fan,” he said, his face thoughtful.

“Hear everything,” I said. “When someone talks, hear the rhythm of the voice.” 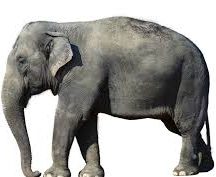 I smiled. “Did you know I have an elephant on my front porch?”

He did that disbelieving half-snort half-guffaw thing that middle-schoolers do so well.

“It’s about six inches tall,” I said, “a little plastic fountain in a tiny pond. My point is that if I ask ten people about the elephant on my porch, nine of them wouldn’t believe it was there. They’re not seeing the world around them. They’re only seeing what they expect to see. To be a writer, to create new worlds and new stories, the best place to start is to be aware of the one you’re in.”

“See, hear, taste, smell, touch. . . Experience everything. Ask yourself why things are the way they are, and what would happen if they were different. That’s the beginning. Once you’re there, it’s a short step to creating your own worlds, your own stories.”

“And write,” I added. “Because, you know, writers write.”

Laughing, he walked away.